It has long been a dream of the Leonardo da Vinci Robot Society to bring one of the Renaissance Master’s creations back to life.

2019 is the 500th anniversary of da Vinci’s death and the Society has chosen to honor his memory and celebrate his life through one of his best known inventions – the Robot Knight. This robot is an early proto-computer android whose read-only programmable memory allowed it to perform many actions. And it was also rumored that the robot’s arm could also perform an extremely complex task…draw a picture!

The Society has hired world-famous mechanical engineering wizard Robert Sabuda to unlock the secrets of da Vinci’s robotic arm. The final result, in the form of a kit, is now available to you as da Vinci’s Drawmaton – which will be live on Kickstarter from November 10th.

Made only of wood and a few pieces of metal, this ancestor of the programmable computer, is capable of reading 1kb of analog memory via wooden “petalos” which, to da Vinci, resembled the petals of flowers.

The programming “petalos” are easily switched out so the Drawmaton can draw an endless variety of single line images. A few turns of the hand knob completes a full rotation of the programming “petalos” and the drawing is complete. You can insert your own drawing tool into the robot’s hand, place any paper into the draw area, turn the knob and the drawing is revealed.

Program your own images to create custom “petalos” which will draw your own Masterpieces!

Kickstarter is a great place for innovate projects like da Vinci’s Drawmaton to come alive, so join us and help celebrate this engineering marvel! 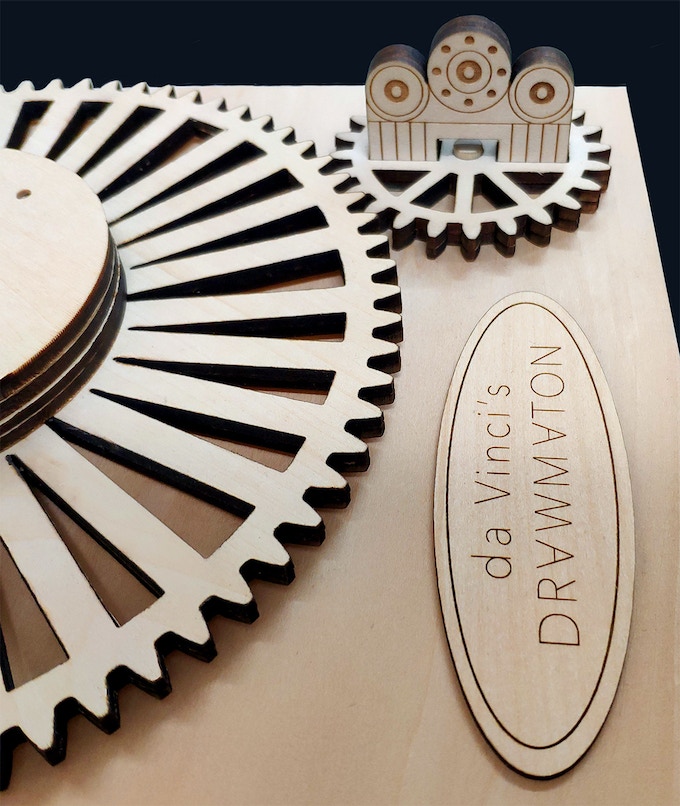 Da Vinci’s Drawmaton is available in three different designs.  Although the machine is actually an early type of computer we thought it would be fun for the first design to resemble a traditional robot!

The machine is operated by hand, just as it was in Leondardo’s day, by turning a small gear knob which activates a larger gear.

The large gear rotates the read-only assembly which sends information down to the Robot’s arm and hand.

Put any drawing tool into the Robot’s hand, place a piece of paper into the draw area, slowly turn the small gear knob and viola!  The Robot draws a single line picture!

The second available design of da Vinci’s Drawmaton is the Gambler.  Part of the team clearly had a  slightly spookier vision of the Renaissance Master’s work in mind (his original Robot Knight must have been a bit of a fright when activated!)

The Gambler has a more detailed hand and, like the Robot model, can draw an infinite number of pictures.

Three different colors of wood are used in the Gambler kit giving this machine an eerie echo from the past!  The 8-layer, laser cut medallion of the the Gambler adds the final touch.

And when’s the last time you saw a skeleton draw a picture?!

The third design of da Vinci’s Drawmaton is the Slayer.  The 10-layer, laser cut medallion pays homage to the Slayer’s ultimate prey, the dragon!

Rich in history from the time of Leonardo, the Slayer is the closest in theme to da Vinci’s original Robot Knight from over 500 years ago.

The Slayer has the most detailed drawing hand of all three designs and is based on meticulous research of what a knight’s gauntlet glove would look like during the time of Leonardo.

But don’t think Slayer is only capable of sketching his elusive prey!  All three designs of da Vinci’s Drawmaton can draw an endless number of pictures.

Da vinci’s Drawmaton, which is actually an early read-only form of computer, gets it’s programming from interchangeable wood discs which Leonardo called “petalos.”  These Programming Petalos reminded da Vinci of the petals of a flower and the name has lasted for over five centuries.

Now that da Vinci’s machine has been brought back to life, we’re also working on a digital program so you can create your own images for the machine to draw.

The images would be converted into Programming Petalos which can be inserted into your Drawmaton so it draws your picture over and over again!

Everything you need to build any model of da Vinci’s Drawmaton is included in your kit!